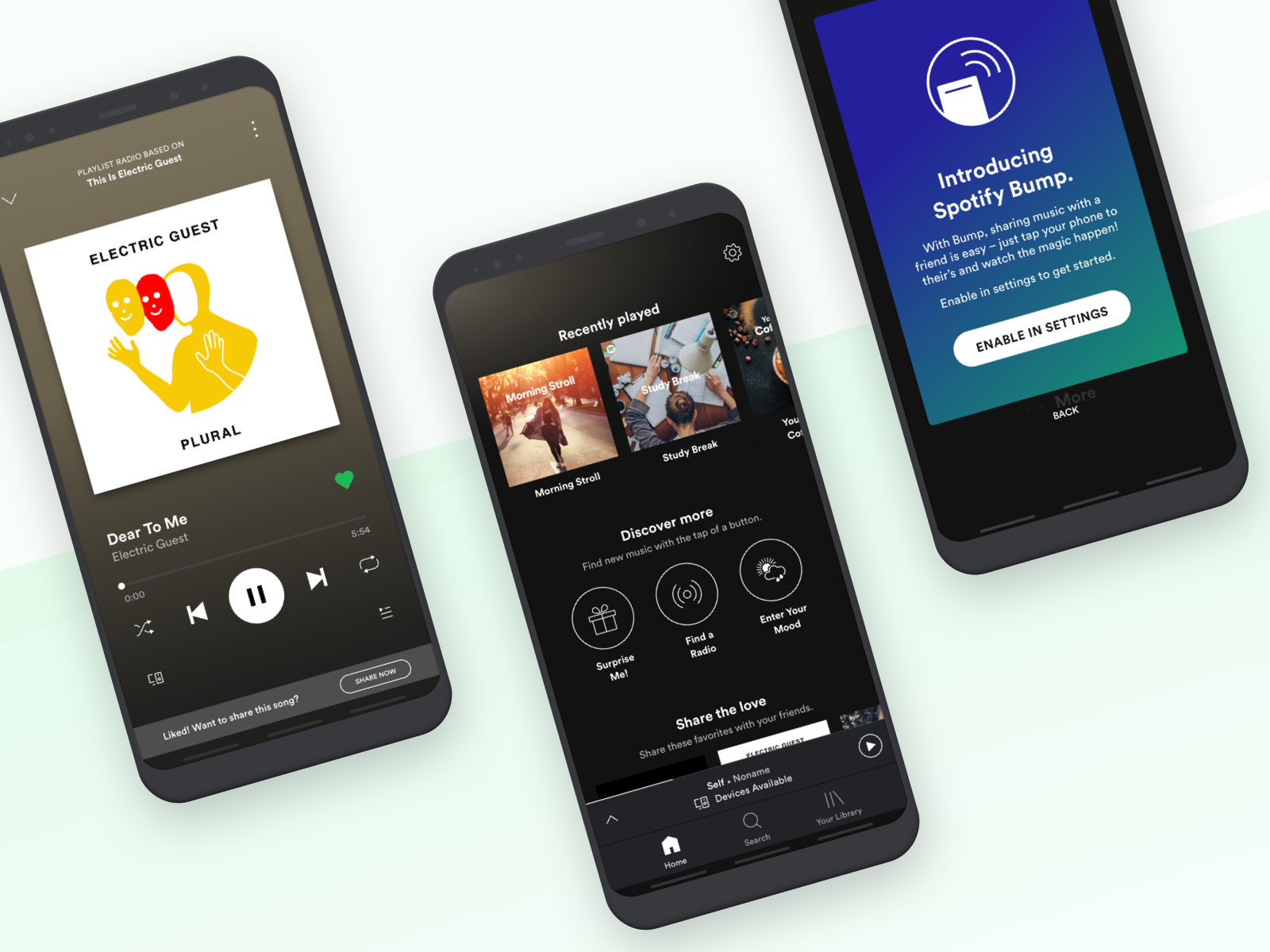 Self-directed, with guidance from course mentor

Originally created as a solution to digital media piracy in the early 2000's, Spotify has become the leading music streaming service in the world. Its mission is “to help people listen to whatever music they want, whenever they want, wherever they want – in a completely legal and accessible way.”

Despite Spotify's global success, they know that they need to improve user engagement and retention, especially given the intersection of music and social connection between people. Past attempts at leveraging that need haven't been very successful – so, the question remains, what's missing?

The project and content presented here are speculative and for educational purposes only; I am not affiliated with Spotify.

A high-fidelity prototype of Spotify with these new features, integrated seamlessly with the app's existing design (at the time of this project, May 2019).

I kicked off the project by learning more about Spotify's positioning in the music streaming industry. Through market research, I also uncovered challenges that Spotify faces when designing social engagement features. We can see that building a strong user base is essential for any social feature or app.

These challenges helped shape the questions I asked later on during user interviews. But first, I compared Spotify's user engagement with that of other high-performing music streaming services. (Data from 2018.)

Based on these findings, I concluded that my user interviews would need to be of:

Before heading out to coffee shops for user interviews, I familiarized myself with the current Spotify app. I noted the function and purpose of each screen/component, as well as usability heuristics to keep in mind when designing new features.

I conducted interviews with five Spotify users at local coffee shops and at a university campus. Read the full interview guide and notes here.

Using an empathy map, I was able to better understand how college students use Spotify and their motivations for using certain features.

I then created a persona with this information – a guideline for the product development and marketing processes that follow.

Using the needs and insights, I crafted "Point of View" (POV) statements and "How Might We" (HMW) questions to define the design problem.

I brainstormed a handful of ideas to answer each HMW question, then facilitated a group brainstorm with four of my friends. (Since my friends aren't all based in the same city as me, I hosted a remote brainstorm via Zoom. Curious about how it was set up? View the agenda and guidelines here.) My friends generated a plethora of ideas, while I took a step back and focused on guiding our discussions.

It's easy to fall into the trap of picking ideas (features) that sound snazzy or completely user-centered, so I mapped out business and user goals to ensure that I prioritize ideas at the intersection of both.

Next, I used Airtable to create a product roadmap that prioritizes features based on goals addressed, effort, and confidence level. Interact with the roadmap here. (In this case, I made priority and release term the same to keep the roadmap simple. In reality, release term and priority level would be separate.)

With the new features selected, I then created an app map to determine where to place each feature. I referenced the app audit from earlier to ensure any new navigation would be intuitive to users.

Keeping in mind what I heard in user interviews, I mapped out three user flows that incorporate the new features.

I then looked at one scenario/flow in detail, to map out the screens and interactions that I need to design, especially given the user's context.

With my prototype in Marvel, I hit the coffee shops once again to find Spotify users to test with. After testing the prototype with five participants, I began to see patterns in their reactions and feedback. Back home, I synthesized test results with a sticky-note affinity map, uncovering three key insights. I then translated those insights into design recommendations and revised my prototype.

Applying these design recommendations gave me the opportunity to improve some other design details:

Usability testing confirmed that Bump is a delightful and desired feature. But before building it out, I would conduct user interviews delve deeper into user needs for this particular feature. Doing so may confirm that NFC/Bluetooth (or other device-to-device method) sharing is the right solution, or may uncover something else as the underlying need and thus lead us to a different design solution. Either way, we'll also need to figure out the hardware technicalities for such a feature, especially if created in conjunction with platform-agnostic music sharing (another feature identified in this project).

In retrospect, there are two key moments that stand to me:

Let's build something together

Interested in working together? Drop me a line – I'd love to hear from you.
I'm currently available for consulting on UX design and Webflow projects.

SAY HELLO
designed & built by Grace lihn
Made with ♥ in Oakland, Ca